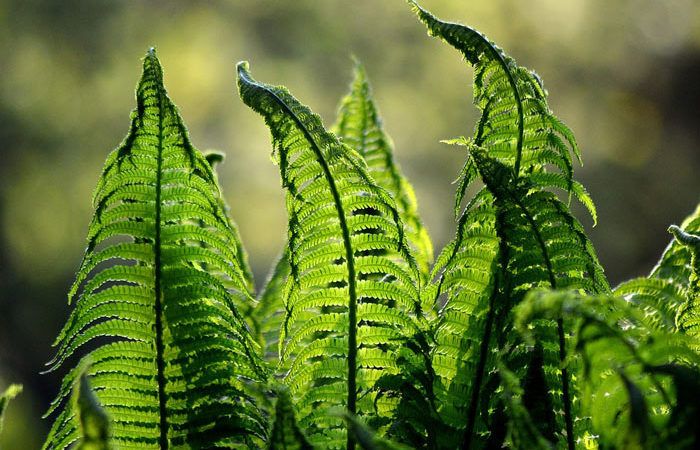 Almost everybody has a spot in the garden around the home which is so shady that very few plants will grow there and consequently these spots are bare eyesores. Have you ever taken a walk through dense, cool green woods and admired the wealth of ferns growing there so luxuriantly, and wished that you could have them around your own home to lend their quiet and cool atmosphere ~ Most of these ferns can be grown easily if one is willing to give a little attention to their care. The Maidenhair Fern (Adianlum pedatum) is perhaps one of the most delicate of these hardy ferns. It grows from 12 inches to 18 inches high and has long, curved fronds borne on long, slender, black stems. When this fern is once well established, it increases very rapidly. The Royal or Flowering Fern (Osmunda regalis) is very stately, growing from 2 feet to 3 feet high. The fronds are large and pale green in color. The Cinnamon Fern (Osmanda cinnamomea) often grows 5 feet high. When its fronds unfold they are covered with a rusty wool, but as they develop they become perfectly smooth. The Hay-scented or Gossamer Fern (Dicksonia punctilobula) grows in masses 18 inches high. It spreads very rapidly. The fronds are large and much divided. The Lady Fern (Asplenium Filix faemina) and the Male Fern (Lastrea Filix-mas) are two of the best ones for general gardening.

The Lady Fern grows from 2 feet to 3 feet tall and has finely cut foliage, while the Male Fern is an evergreen sort growing about is inches high.

The Walking Fern (Camplosorus rhizophyllus) is a low creeping fern. It grows in little tufts with evergreen fronds which take root when they touch the ground, forming other small plants. The Climbing or Hartford Fern (Lygodium palmatum) is another small, dainty fern. Its slender stalk will grow from 1 foot to 4 feet high, with small, palmately cut leaves. The Christmas Fern, Asplenium acrostichoides, is an evergreen sort and is more showy in Winter than in Summer. It is especially at home in rocky places, preferring moisture and shade. The Aspidiums, especially A. marginale and A. spiaulosa, are attractive ferns for moist places. A very common fern, the Common Polypody, Polypodium vulgare, although not individually beautiful, is seen to advantage upon the ledges of gorges where it forms dense mats of foliage. There are a great many different species of ferns and if they are carefully studied, almost any corner in any garden can be supplied with a touch of fern.

UTILIZE. Since most of these ferns require a shady and moist situation, they can be massed along shady. woodland paths, at the edges of ponds or along the sides of streams. Many are good for planting on the north side of houses and as edges for borders. The small ones are almost invaluable for the rock garden or near small artificial waterfalls. In the ordinary garden, very pretty effects are gained by planting the early flowering bulbous plants among them, because the fronds of the ferns begin to unfurl very early in Spring. Collections of hardy ferns are extremely interesting. Many of the sorts are good for cutting during the Summer.

GENERAL. Very few of these ferns will grow in sunny situations. Try to imitate nature when planting them in your gardens. Shady or semi-shady places ale best, planted underneath trees and around tall shrubbery, where the plants Will be more or less protected from the sun and hot, dry winds. Good drainage is absolutely necessary and it is advisable to raise the fern bed 3 inches or 4 inches in order to insure this. Plenty of water should be supplied during the dry Summer months. In preparing the soil, dig as deeply as the roots of the trees will allow. If the soil is clayey or poor, use plenty of decayed leaves, peat, manure and other loose materials. The soil should be very fine; light and porous. `’then planting the small ferns in the rockery almost pure leafmold can be used. None of the ferns should be set deeply in the soil, most of them requiring about an inch of soil covering. Those which grow from crowns should be set on the soil so that the crown is not covered. Ample room should be left between the plants because they spread so readily. The Royal or Flowering Fern can be grown in 2 or 3 inches of still water or in very moist places. The Cinnamon Fern is usually found in mucky soils. The Gossamer Fern is one of the best to grow along walks for it will grow in either sun or shade. Ferns should be reset in the Spring or during the Summer through August. This will give plenty of time for a new set of fronds to come while the roots are getting established. If they are planted in the Fall they require a good mulching of leaves. The fronds should be cut back when the plants are moved.

PROPAGATION. The Ferns are propagated by dividing the root stalks, which are the underground stems from which the upright stems grow.