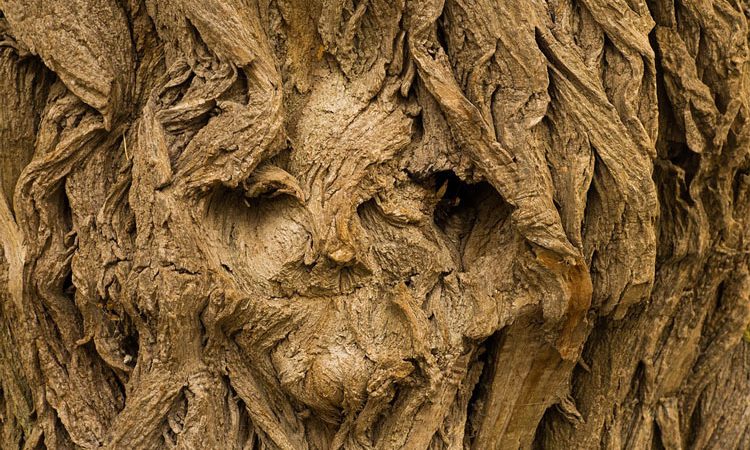 Like the last and messy hours of a party gone on too long, the soggy, cool days of late autumn cast about the garden a mood of the season’s demise. Yet as the last colored leaves, varnished with the first rains of winter, fall earthward, the deciduous trees bare their sinewy musculature for all the world to look upon. And the naked truth is that, not unlike a summer’s beach of barely clad humans, some individuals pique more interest in their scantiness than others.

The cambium of the woody plant, located just under the bark, is the tissue which is collectively responsible for growth in diameter. Each spring as growth resumes, millions of cells comprising this cambium layer are replicated through cell division. Those new cells which are formed on the inside of the cambium become the xylem; the tissue which draws water and nutrients from the soil and delivers it to the leafy superstructure of the plant above. Sister cells are also produced on the outside of this tissue and become the phloem: pipework to distribute simple sugars produced in the leaves of the plant through photosynthesis. Both phloem and xylem cells are replaced each year by a new generation; older generations of cells cease to function in their original capacity but the plant has not yet lost interest in their existance.

More often than not, depending on the species, the dead cells which were once functioning phloem tissue are impregnated with compounds that will protect the fragile cambium layer only millimeters within. Suberin, a common ‘filler’ of these dead cells is present in the highly pliable yet tough and water proof stopper of fermented libations. The cork of commerce is actually dead suberin filled cells harvested from Quercus suber, the cork oak. Ultimately these aging cells , continually replenished from behind the ranks, are expelled from the tree. It is the last hurrah of these sloughed cells that provides garden interest to the horticulturist. Though it may be admired during the growing season and dormant alike, the stark skeletons of a sleeping landscape can provide color, texture and form neatly enveloped within the essence of the season. It is unfortunate that the epidermal layer of the shrubs and trees plays second fiddle to the attention paid foliage, flower and fruit in the garden as it is the skin of these plants which is with us the full calendar as opposed to their more ephemeral attributes. Sensually smooth and bronze, brilliant reds and yellows, ghostly white and patchwork quiltings of red, gray, green and brown can all describe the varieties of interest provided by the bark of many woody and herbaceous plants alike.

Bark can be a tactile ornament, meant for stroking and polishing with our hands as we walk our gardens, or marveling in its bright contrasting colors during the winter months. It also can be a focal point, as with the smooth and gray pachydermic monoliths of the European Beech, in the garden the year round. Here it is not so much the texture or color of the bark, but the sillouette and form of the dormant superstructure of the plant which we will find remarkable in our winter gardens.

Considered amongst the aristocrats of trees which we can include in our gardens are the many and varied species of maples, found in the genus Acer. Many maple species are surprisingly stronger in winter attributes than those of foliage and fruit. Though maples are found throughout the north temperate zones of the world, it is in China where their population is centered with nearly 100 species. Here, a great number of species are found which can be collectively refered to as the snakebark or stripebark maples.

Acer davidii, being the among the most commonly planted, creates a lovely small understory tree suited best to partially shaded conditions. Nearly unlobed leaves of dark green will turn striking shades of orange to red or soft yellow in autumn depending on the individual. Young branches turn red in winter, with older wood offering smooth polished bark with etchings of white jagged lines running its lengths. Among the stripebarks, however, none can compare with Acer tegmentosum, known commonly as the Manchustripe Maple. The large leaves emerge from glaucous twigs with a papery texture and a exuberant shade of green. The autumn color is a lovely yellow which softens many of the brighter colors of the season. It is for the ghostly bare trunk and branches with finely dissected stripes of green and white, however, that I most admire this species. It creates a striking effect among the deep greens and dull browns of quiet winter. Interestingly, Acer pensylvanicum from the eastern coast of the United States, is the only stripe bark maple to occur outside of the Orient. It is closely related and nearly identical in appearance to Acer tegmentosum boasting very finely dissected white stripes on its branches, without the stark intensity, however, as its Chinese counterpart. It is a perfectly acceptable alternate and more readily available than A. tegmentosum. A. pennsylvanicum ‘Erythroblastus’ takes the effect a step further by intensifying younger twigs to nearly fluorescent shades of pink and red. Placed in front of a dark foliaged conifer, the winter effects from this selection creates a remarkable scene of a hot white flame haloed by glowing coals.

Commonly called the Redvein Maple, Acer rufinerve, is another Japanese species of striped bark maple which is planted for effects from the bark as well as autumn leaf color. Its common name is derived from the fine, reddish bristles that run along the veins of leaves on their undersurface. A distinctive identifying and ornamental characteristic of this species is the blue-white glaucous coating laid down on the young branches. As the wood ages, this glaucousness fades to expose green and white stripes running vertically along the stems and main trunk. If sited with a dark green background, this species is remarkable in its ghostly, spreading scaffolding which stands silent in the winter landscape. In autumn, the leaves of this species will often die off in rich shades of orange and red. 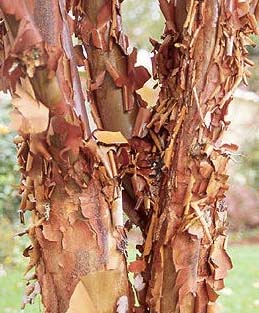 Acer griseum, commonly known as the paperbark maple, also hails from China This species was discovered by Wilson in 1907 in western Hubei province. At that time, he reported it as being a common tree with many large specimens, however sadly, it is now reported to be endangered in its native haunts. It remains a small tree in cultivation and holds interest throughout the year. The trifoliate leaves turn brilliant shades of red and orange in autumn but the cinnamon-brown peeling bark makes it worth viewing at any time of the year. As propagation techniques have become more sophisticated, this only-recently-quite-rare tree in commerce has become widely available. I was delighted during a recent trip to Juneau, Alaska to find this species as the focal planting under the local ‘Golden Arches’. A sure indicator that a plant’s time has come.