You too can Grow Primroses 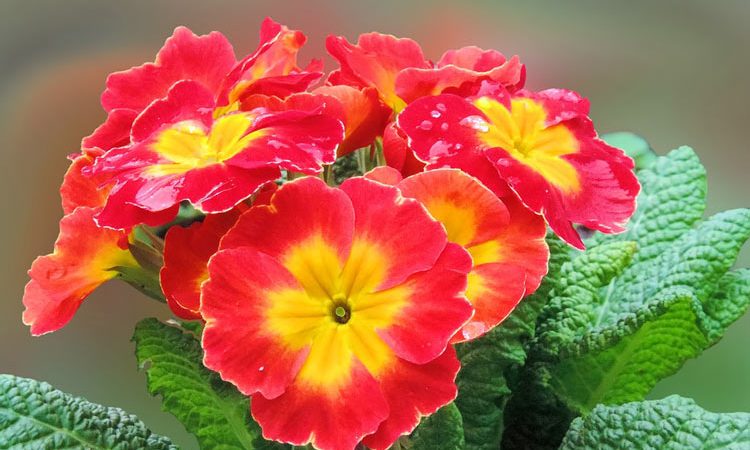 The few requirements for primroses are easily met and are found in practically every garden. They do require shade throughout Mid-America, but this is always available on the north side of the house or in the shade of shrubs, evergreens, or trees. Primroses not only offer a variety of form, size, color, the habit of growth, but bloom (depending upon the variety) over a considerable period of time. Starting with the early Juliae hybrids such as ‘Wanda’ which blooms about pussy willow time, one continues through the mass of bloom of the polyanthus through to the double and triple decked flowers of the Japanese primroses in late May and even early June. Some of the less common helodoxa primroses may even bloom up into July. Not many other plants give such a long period of bloom.

It’s easy to get started with primroses. Blooming size plants of the more common forms are available from many nurseries. From the Pacific Coast primrose specialists, you can buy flowering size plants of many different kinds. At certain times of the year they offer seedling primroses at very attractive prices. These young vigorous plants take hold quickly and give considerable bloom the following spring. Primroses may be grown from seeds. Although only the more common kinds such as Polyanthus are available from the average seed store, primrose specialists handle a wide range of species and varieties.

Most primroses are very easy to grow from seeds. Contrary to the recommendations of some primrose specialists, there is no need of freezing the seeds before planting. As long as the temperatures are not up in the 80’s day and night, primrose seeds can be sown either outdoors or indoors. The greatest difficultly in raising primroses from seeds however, is sowing the seeds in the proper sort of seed bed.

A mixture of equal parts sand and peat moss with the seeds covered 1/16 to 1/18 of an inch with this material seems to be ideal. Since there is no nourishment in this mixture, an inch layer of it can be put on top of a soil mixture made up of equal parts of soil, sand, and peat. Primrose seeds may be sown in early August, although if the temperatures are high it may pay to put the seed pans or flats in a cool cellar until the seeds germinate.

The seeds may be sown in November for spring germination in the cold frame or can be sown any time during the fall in the greenhouse to be kept growing throughout the winter. Seeds may also be sown outdoors, preferably in a cold the sand and peat seed bed will give wonderful results. I personally have had equally good results sowing the seeds in a greenhouse in October, in the greenhouse in January, the cold frame in March and in early August.

After the seedlings get their second or third leaves they can be transplanted. Again the soil mixture is very important. You will probably get better root growth if they are put in a bed or in flat rather than in individual pots. Make the soil of equal parts garden loam and peat. Mix a cup of any complete commercial fertilizer with each bushel of the soil mixture.

The more common vigorous primroses such as Polyanthus can be planted three inches apart. The smaller ones can be put closer together. If, during the spring and early summer, you are planting the primrose seedlings in a cold frame, they should have a mixture of at least equal parts peat and soil and preferably three parts peat to one part soil. There should be a bed of this four to six inches deep for them to grow in. Again the fertilizer should be thoroughly mixed through the bed before planting.

For many of you who are buying seedlings or growing your own seedlings, better results will be obtained in most gardens by growing them in a cold frame where they can be shaded with muslin (an old sheet) or by a lath shade. If they are kept thoroughly watered throughout the summer and fertilized every two to three weeks with a liquid fertilizer they will make an enormous amount of growth during the summer.

The root systems will be at least the size of your fist and every bit of it will come out in the peaty mixture that you have them growing in. You will learn from experience as you try to grow some of the less common and more difficult primroses that you may have to keep a number of the species in a shaded cold frame rather than try to plant them in the garden itself.

Primroses, with the exception of Florindae, helodoxa, Bulleyana, Beesiana, and japonica require a well drained soil. These we have just mentioned, however, will grow in a relatively wet soil. Florindae and japonica will thrive in a bog.

Before planting any primroses in the garden proper the bed should be prepared by mixing the soil so it is at least half peat to a depth of at least eight inches. As with all other planting, a complete commercial fertilizer should be mixed with the soil.

Primroses can be planted in early spring, in late spring after they have finished blooming when they are normally divided, or in the early fall. The more common primroses seem to be perfectly hardy and except for a light mulch to prevent heaving they do not require a great deal of winter protection.

Primroses should be fertilized regularly. In the early spring before growth starts scatter a complete commercial fertilizer such as a 4-12-4 or something similar over the entire bed. Another application can be given in the early fall to stimulate a little fall growth before the ground freezes.

The worst primrose pest and the one that probably kills more primroses than any other through the Midwest is the spider mite (red spider). Because primrose leaves are close to the ground, it is difficult to contact these mites with the average dust or spray. The use of natural products to control mites is recommended.

Slugs are always around primroses because they grow in the shade. Either prepared slug bait sold under various trade names. They should be used at least once a month starting with April and continuing through the season until fall freezing. Sow bugs may be controlled by dusting or spraying with chlordane.

Now we are confronted with the problem of knowing what primroses to grow. In the past the English were considered as having the best primroses. But today it is interesting to know that in England the florists using primroses for cut flowers are growing not their own hybrids but those of our own Pacific Coast primrose specialists. They are hybrid Polyanthus.

There is no question but that the bulk of primroses in your garden will be Polyanthus. The range of color is from white to cream to yellow to orange to pink to red to purple to blue. The flowers are from one half inch in ordinary ones up to silver dollar size in the improved strains. They may be purchased as mixed plants or according to colors. The same is true of the seeds. There is nothing more showy in a spring garden than Polyanthus primroses. They are usually perfectly hardy and given the proper soil and other conditions they will multiply.

Japanese primroses are seldom grown to the extent that they should be although they are just as easy to grow. They do not multiply as much as the Polyanthus, but their 18-24 inch spikes of white, pink, or red flowers are magnificent. If you have a wet poorly drained shaded spot in your yard they will thrive there. They are very fast growing from seeds.

Somewhat similar to the Japanese primroses with more delicate colors are Bulleyana and Beesiana. They do not seem to be quite so hardy or as easy to grow as japonica.

Auriculas are very different from their sister primroses. They have smooth leaves that look almost like small cabbage leaves. The flowers come in cream, pale yellow, lavender and purple. They are relatively easy to grow from seeds, but in many gardens will not be as permanent. Personally, I find that they winter better in the cold frame, then they can be put out into the beds in the spring where they can be seen and enjoyed.

Primula denticulata has rather wide spreading leaves and a little compact head of lavender flowers in the early spring. It is a good grower and easy to grow. In the cooler climates, it may develop into sizable clumps. Others may find that they are not quite as permanent as the Polyanthus.