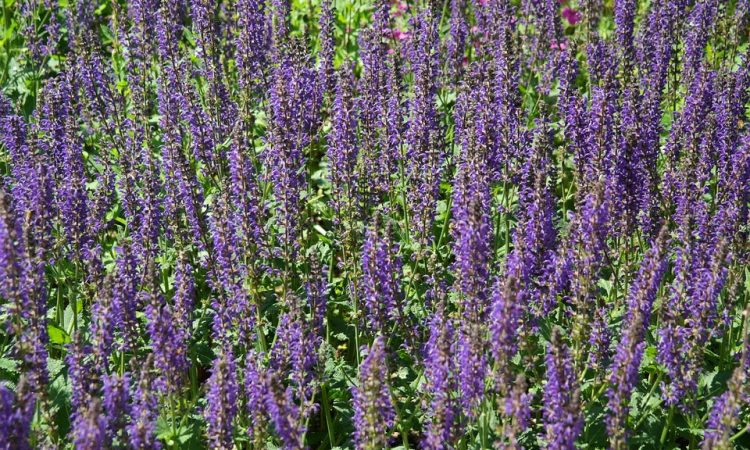 (The Latin name used by Pliny meaning safe, referring to the medicinal properties)

It is unnecessary to describe the Scarlet Sage which is now much planted in some sections of the United States. There is no question regarding its growth or its blooming qualities, but in some cities its hot color is seen on so many streets that it becomes monotonous. Someone has said that the color may be heard before it is seen. Varieties are cataloged which are dwarf, others tall. The botanical name is Salvia splendens. Pride of Zurich, Bonfire, America, Globe of Fire are some of the varieties listed.

Gentian Sage. Salvia patens. This is a most interesting blue Sage which is unexcelled for the depth of its ultramarine blue shade. Although it does not bloom as profusely as the Scarlet Sage (S. splendens), yet it is of an unusual color and worthy of culture.

Mealycup Sage. Salvia farinacea. Really a perennial, this species is not truly hardy in the northern states so that it is treated as an annual. The plants grow 3 feet tall. The lovely blue flowers are borne upon mealy covered spikes. The contrast is lovely.

Where to Plant. Were we to cast our prejudices aside we would have to admit that the Scarlet Sage is one of the most popular of red-flowering annuals. When it is planted in long rows, the effect is dazzling. And to those who would plant the Blue Sage we would say that they must not be disappointed when the plants bloom, for they produce fewer flowers than the Scarlet Sage; however, the color is marvelously deep.

GENERAL. Sow the seed of Scarlet Sage in the greenhouse in February or very soon after the first of March in a hotbed or sunny window. After transplanting the seedlings into separate pots or flats, keep them indoors until May when danger of frost is passed, after which set them in the border about 18 inches apart if the tall varieties are grown. Scarlet Sage is propagated from cuttings taken from stock plants salvaged from the garden at the approach of frost. Soaking the seed causes it to come up better.

The Gentian and the Mealycup Sage may be treated the same way, the plants being set at least a foot apart. The roots may be dug and stored out of reach of frost over Winter as these plants are perennials, and are good for more than one season if protected. The Mealycup Sage self-sows freely, so that it may be counted upon to form real clumps of plants when once established.