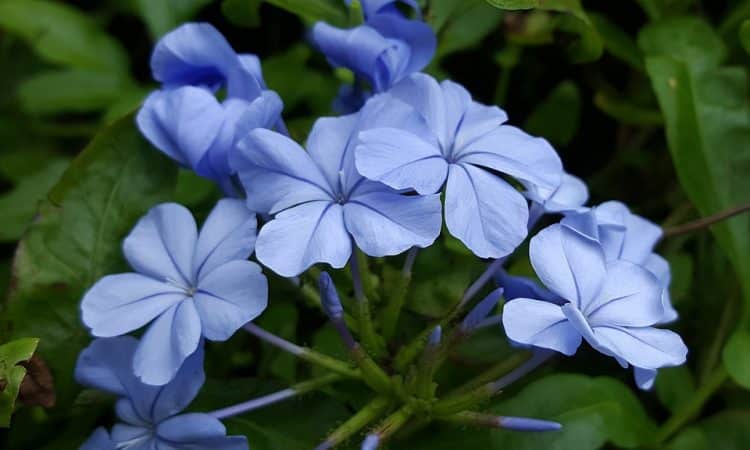 I am very prone to love at first sight. In fact, it happened just last week. I saw a tall southerner “across a crowded room”, as the song says. My heart stood still (as another song says). I was enraptured.

The tall stranger was plumbago (Plumbago auriculata, also known as Plumbago capensis), which is sometimes also known by its extremely unromantic common name, leadwort. I had my rhapsodic moment at Duke Gardens, the glass-enclosed horticultural pleasure ground created by the late heiress, Doris Duke, on her Somerville, New Jersey estate.

Duke Gardens is divided into a series of “rooms”, each representing the horticultural traditions and typical plant materials of a specific region. The divine plumbago was clambering up a trellised wall in the “Southern Colonial Garden”. There may have been little actual shadow in the room, but with its hundreds of blue phlox-like flowers, the plumbago put many of its neighbors in the shade. From a distance, the vigorous climber looked like a billowing blue cloud that all but subsumed the trellis over which it hovered. I knew then and there that I wanted a plumbago of my own.

Returning for a moment to reality, I heard the tour guide say that plumbago grows wild in the American south. This remark gave me the kind of palpitations that infatuated people always get when they encounter bumps on the road to true love. Despite the effects of global warming, the American South and northern New Jersey do not yet share the same climate. My plumbago could live outside in the summer, but would obviously need special accommodations during the gray, depressing New Jersey winter.

Some things in life are not fair. Doris Duke had enough money to dazzle two legged playboys like the notorious mid-century Lothario, Porfirio Rubirosa, and to indulge the needs of long stemmed playboys like Plumbago auriculata. She also had acres of greenhouses. I, on the other hand, have a sunny dining room window. Obviously any relationship that I might possibly have with plumbago would require some effort on my part.

While trying to figure out these arrangements, I decided to inquire into plumbago’s background. As its alternate botanical name (capensis) indicates, plumbago is native to South Africa. Left to its own devices, the plant forms mounds 5-feet high and 6-8-feet wide. Its “lanky stems” and vining habits are also perfect for training on a support à la the Duke Gardens’ plumbago. The species blooms from late spring through fall, so my hypothetical plumbago would do most of its best work while outside on vacation.

As we moved away from Miss Duke’s plumbago I began to wonder what I would have to do to make a similar one comfortable at my place. To begin with, anything that grows to be as tall as the average human being needs a really big pot. Fortunately I have a spare twenty-gallon featherweight pot in the garage. It is clear that I would have to invest in one of those wheeled plant dollies to make the spring and fall transfers easier on me. In the winter my plumbago would reside in the sunniest spot in the house-my dining room. Since the house is usually bone dry in the winter, I would have to put the portable humidifier comfortably near the pot, the better to waft moist vapors over it. That way both the plumbago and I could avoid becoming desiccated and brittle.

My plumbago would also need to have some kind of support structure anchored in the soil of its pot. One of the high-end catalogs has a six-foot tall cedar tuteur that bears a vague resemblance to the Eiffel tower. Naturally I would forgo a mortgage payment and buy it. At the same time I would order a new pair of Felco #2 clippers, because I would need them to control my plumbago’s rampant growth. After all, any plant that was good enough for Doris Duke deserves the very best.

I would have to keep my plumbago sufficiently watered at all times, except during the winter months, when it would be resting. I would also have to keep Arthur the cat from disturbing its roots by digging in the pot.

I don’t know whether it’s really wise to dwell on the aftermath of love at first sight. It tends to take the bloom off the rose (or in this case, the plumbago). The more I thought about acquiring a plumbago, the more I thought that inviting one into my life would not enrich my existence nearly as much as I had supposed. Fortunately this melancholy reverie was ended abruptly as we moved into a different garden room and I laid eyes on an absolutely mind-boggling gloxinia. It was so big, so red, so gorgeous that I forgot about the poor lanky plumbago. I experienced a revelation. A gloxinia would be perfect for me. I began to imagine what it would be like the first time the two of us went to a meeting of the Gloxinia and Gesneriad Society together. Doris Duke never had it so good.