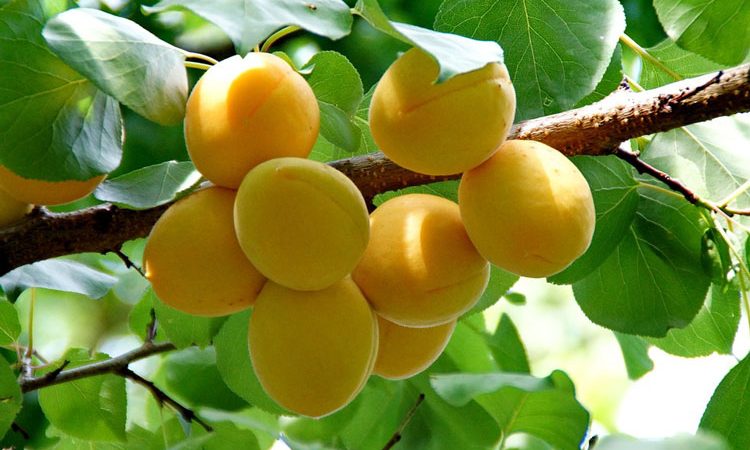 Of Mediterranean origin and flowering in late February and March, outdoor apricots demand a frost-free sunny site. Bush trees can be grown only in southwest and south-east England; elsewhere, as fan-trained trees on walls facing east, south, or south-west, or in greenhouses.

Apricots prefer a moisture retentive, friable and well-drained soil: they object to stiff clay and heavy loam. A pH of 6-5 -tending to alkalinity-is desirable.

Bush trees are spreading in habit. The leaves are broad and heart shaped, the flowers white or pale pink, borne singly or in pairs. Apricots are self-fertile and may be planted singly.

Forced apricots are ripe from mid July, outdoor fruits to the end of September. Use them for dessert, bottling preserving and jam making.

Propagation is by budding on to plum root-stocks-Brompton or Common Mussel (medium to large trees), St Julien (small to medium trees)-or on seedling peach or apricot.

Cultivation Plant preferably between late September and November, particularly under glass, or up to mid-March, at 4.5m (15ft) apart. Sprinkle two handfuls of bone meal in the planting hole, give a spring mulch of 51kg of well-rotted manure per 10sq m (10 sq. yd), plus 28g(1oz) of sulphate of potash per sq. m (sq. yd). Give 140g (5oz) per sq. m (sq. yd) of basic slag every third year. Water the trees regularly the first season and subsequently in dry spells-mature trees may wilt badly. Saturate greenhouse soils in February and mulch with spent hops or peat.

Force with gentle heat in February to a maximum temperature of 55°F (13°C), rising to 65°F (18°C) in summer with free ventilation. Syringe the foliage with water daily. Give full ventilation at leaf fall to induce complete dormancy.

Protect outdoor blossom from frost by draping remay over the trees at night, removing this by day to allow pollinating insects to work. Assist pollination under glass by hand. Remove the blossom the first season.

Fruit forms both on young wood and old spurs. Maintain a proportion of each. Shorten the leaders by half to two-thirds after planting, laterals to a few inches. Subsequently, shorten the leaders annually by one-third. Tie in one healthy shoot per 25cm (10in) of main branch, remove ill-placed and upright growing shoots and pinch back the rest to four leaves from mid-June onwards.

Thin the crop when the set is heavy, first at pea size to one fruitlet per cluster then again after stoning, and when the natural drop is over, to 8-13cm (3-8in) apart. Test for stoning by pressing a pin into a few fruitlets.

Defer picking until the apricots are well colored, ripe and part readily from the spurs without tearing.

Apricots are subject to silver leaf, bacterial canker and brown rot diseases, but are unaffected by peach leaf curl. Aphids, wasps and flies are the main pests.

The following are the best varieties: