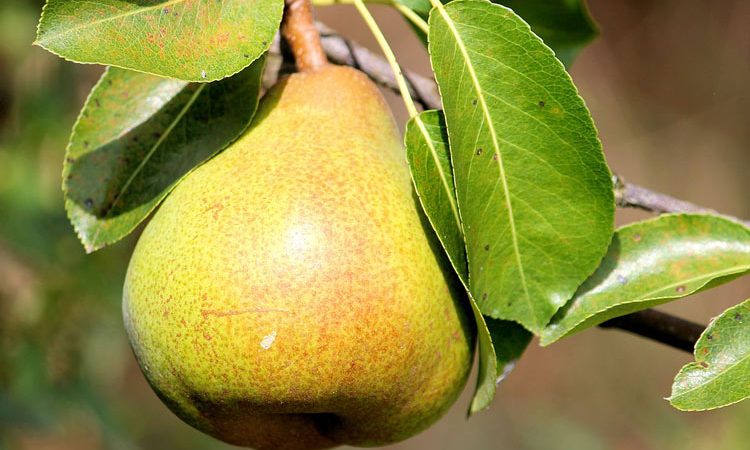 The pears grown in England is the European Pear which derives from Pyrus communis, native of the temperate parts of Europe and the western part of southern Asia as far as the Himalayas. In America some varieties are grown which are hybrids between the European Pear (as represented by `William’s Bon Chretien’, known in America as ‘Bartlett’) and Pyrus serotina, the Japanese sand pear.

Information for caring for a Pear Tree

Pears have been cultivated since very early times (Pliny, the Roman writer, knew of 39 distinct varieties) and they may have been introduced to Britain during the Roman occupation. They were certainly grown in monastic gardens and were popular in Tudor times. The nineteenth century saw the introduction of hundreds of new varieties, many originating in France and Belgium. Today, the number of varieties favored by market growers can be numbered on one’s fingers.

In the opinion of most people dessert pears have a flavor superior to that of apples; it is more pronounced and the pears themselves are frequently much juicier. The best dessert pears have a melting consistency like butter (and hence the French word beurre applied to many varieties), although, for texture, many people prefer a crisp apple.

Although pear trees are longer-lived than apples, they tend to spur more freely forming too many clusters of buds. They are less prone to pest and disease attack; they flower earlier and therefore are more vulnerable to spring frosts. A few varieties only are suitable for growing in the open in most parts ofBritain. Others need the protection of a wall, and some not only require such shelter but also will thrive only in our warmer districts.

Although all dessert pears can be cooked if they are picked while still slightly unripe, particular varieties are usually grown for this purpose. Special varieties, too, are grown for the making of perry; a fermented drink made from the juice in much the same way as cider is from apple juice.

A slightly acid soil suits pears best and a very alkaline soil should be avoided as, in such conditions, pears suffer badly from iron deficiency.

Compared with apples, pears are more likely to withstand poor drainage, but are less able to tolerate dryness. A very light sandy soil, therefore, must be liberally enriched with humus-forming and moisture-holding materials. The ideal soil is a deep; rich loam somewhere between light and heavy.

Standard or half-standard trees take many years to come into bearing and eventually become too large for the average garden. Bush-type trees, pyramids, cordons, fans or espaliers are, therefore, more appropriate for small gardens, and these are usually grown on ‘Malling Quince A’ rootstocks.

The form of tree to be grown depends rather on the space available. For the open garden, bushes, pyramids or cordons are the usual choice. Bushes take up most room but their maintenance takes least time. Pyramids come into bearing more quickly and their small size makes spraying, picking and protection from birds easier. Their pruning, however, takes rather more attention. Cordons require posts and wires for support but have the merit of taking up little room individually so that a single row can comprise a collection of varieties providing a succession of fruit. A row of cordons, too, can sometimes be planted on the southern side of a wall or close-boarded fence, so that full advantage is taken of the wind shelter thus provided.

Fans (trained specimens) can be grown in the open, with suitable posts and wires for support, but this is the best type of tree to grow against walls. Espalier training may also be used against walls and espalier pears may be planted as a decorative yet useful edging to vegetable plots. The latter idea used to be more popular than it is today; the drawback is that fruit planted on the edge of the vegetable plot is liable to receive too much nitrogen so that growth is encouraged rather than fruiting, and suitable spraying is sometimes difficult where the drift may be harmful to other crops.

Planting should be done between leaf fall and March-the sooner the better, and provided the soil is friable, following normal lines of procedure. It is particularly important that the union between scion and rootstock should be well above soil level (10cm [4in]). If this point is not observed and roots are formed by the scion, the dwarfing effect of the rootstock will be obviated and the tree will. not only grow too large but will be many years coming into bearing. It should be noted, too, that where trees have been double-worked (because of incompatibility between quince and the chosen variety), there will be two unions and it is the lower one which must be quite clear of the soil.

After planting, staking and making firm, it is advisable to put down a 5cm (2in) deep mulch of garden compost, well rotted stable manure, peat or leafmould which will help to keep the soil moist in the event of a dry spring. Newly planted pears should be inspected regularly in dry weather and watered liberally if there is any tendency to dry out.

The subsequent manuring of pear trees should be adjusted according to performance.

In many cases pears will be maintained in good health by an annual (spring) application of rotted dung-a dressing on the surface about 5cm (tin) deep-this mulch then being gently pricked into the soil surface with the fork in autumn. As an alternative or where no dung is available, a mixture of chemical fertilizers should be given early in February; 56g (2oz) of superphosphate of lime, 28g (1oz) of sulphate of ammonia and 14g (0.5oz) of sulphate of potash per sq. m sq. yd) sprinkled as far as the roots extend (approximately the same as the spread of the branches or the height of the tree, whichever is greater) and raked into the surface.

In general, the pruning of pears follows similar lines to that of apples (see Fruit pruning), and so does the spraying to control pests and diseases.

In harvesting pears, it is particularly important to pick at the right moment. With early varieties, it is preferable to pick a little too soon than to wait too long, but with mid-season and late keeping sorts the pears should be picked only when they separate easily from the spur on being lifted just above the horizontal in the palm of the hand and then given a very slight twist.

In choosing pear varieties to plant it is necessary to consider not only the purpose (dessert, cooking, bottling) and personal taste, but also the provision of suitable pollinators which must flower at the same time as the variety to be pollinated.

The varieties ‘Jargonelle’, `Josephine de Malines’ and ‘Packham’s Triumph’ are tip-bearers and on that account should be avoided for pyramids, cordons, fans, or other forms of trained tree.