How to plant Strawberries 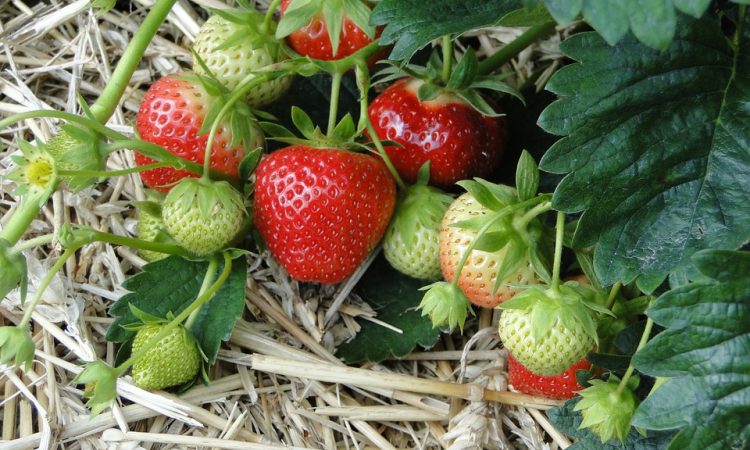 Stocks Strawberries are subject to several serious virus diseases, and at one time these threatened to make commercial cultivation quite uneconomic and garden culture most disappointing. However, there has been considerable improvement in the general health of strawberry stocks since the introduction of a government scheme of inspection.

It is of the utmost importance to start with disease-free stock and one should purchase from a grower with a good reputation to maintain.

Site Although the strawberry is of woodland origin, the modern fruit requires all the sun it can get. On the other hand, the site for the strawberry bed needs to be sheltered, for cold spring winds can very seriously check growth. The garden sloping gently towards the south, unshaded but sheltered, will yield the earliest crops.

Although strawberries may be grown in most parts of the world, late spring frosts may be a limiting factor. This can be quite a local problem and if your garden lies in a frost-pocket there is not much you can do about it except to be ready to give some kind of protection with cloches or plastic to plants in flower or to sidestep the difficulty by growing only the so-called perpetual fruiting types, removing the first trusses of blossom and concentrating on late summer or autumn fruits.

Soil Strawberries do best in a rich medium loam with high humus content. Well-rotted leafmould is an excellent material to incorporate in soils deficient in organic matter, but any other decayed vegetable matter can be used. The site needs to be well drained.

Soils with a very high lime content are unsuitable for strawberries.

Preparation Early preparation will not only assist soil improvement but will also ensure freedom from perennial weeds, which can be a considerable nuisance. When digging, rotted farmyard or stable manure should be worked in, 5kg (10lb) per sq. m sq. yd) being regarded as a normal ‘dose’ and twice this rate is recommended for poor, sandy soil. Follow with a surface dressing of 28g (1oz) per sq. m sq. yd) of sulphate of potash.

Where no natural manure or garden compost is available 28g (1oz) per sq. m sq. yd) each of superphosphate, sulphate of ammonia and sulphate of potash should be sprinkled over the bed after digging and lightly raked in. If the soil is not already rich in humus, add up to half a bushel of peat per sq. m sq. yd).

Planting Strawberries are usually planted in beds, the rows being 0.7 to 1 m (2 to 3ft) apart, the plants 38 to 46cm (15 to 18in) apart in the rows, according to the richness of soil. One reason for early soil preparation is that the soil should be firm.

Summer-fruiting strawberries may be planted either in the late summer to early autumn or even in the spring, provided that in the latter instance all blossom is removed the first summer. The earlier plants can go out, the bigger and stronger plants they will make their first year-so, if you can obtain plants so early, plant in July, August, or even September, but October is late.

The perpetual-fruiting varieties can also be planted in autumn but rooted runners are not available so early. However, as they have time to catch up in spring, October planting is quite satisfactory, provided the soil is properly, a workable and will break down to a – friable tilth. On cold, heavy soils the planting of perpetual strawberries is probably better deferred until spring.

When ordering, for preference stipulate plants which have been rooted in pots. These will be slightly more expensive but they will transplant more readily, with less root damage, and they will have better root development.

Use a trowel for planting and take a hole out for each plant deep enough to accommodate the roots without bending them. Then return a little soil at the center of the hole to make a mound on which the strawberry plant can ‘sit’ with its roots spread evenly around it.

The base of the crown should be just at soil level: if it is too high, roots are exposed and dry out, resulting in eventual death of the plant; while if the crown is half buried, it will either produce unwanted weak secondary growths or rot away entirely.

Plant firmly, using the handle of the trowel as a hammer. As you proceed, see that the roots of plants waiting their turn are not exposed to the wind. Finally, rake the bed smooth and give a good watering to settle the soil.

Follow up Keep an eye on the weather and the state of the soil because many strawberry plants are lost or seriously retarded by the effect of drought during the weeks immediately after planting. Also inspect the bed after hard weather, and refirm with your boot any plants, which have been lifted by frost action.

In the early spring scatter fertilizer dressing down the rows at the rate of 56g (2oz) per sq. m sq. yd). This is made up of 1 part of sulphate of potash, 1 part of sulphate of ammonia and 2 parts of superphosphate (all parts by weight). Be careful that these fertilizers do not go on the leaves, and gently rake them into the surface soil. Then apply light mulch of well-rotted farmyard manure, garden compost or peat to help to preserve soil moisture in the event of a spring drought but be prepared to water as well when necessary.

Timing the fruit When, in the spring following planting, the first blossom buds appear, you have to make a major policy decision. First-year flowers on maiden plants will give the earliest crop and the largest individual berries, but if you remove this first year’s blossom and wait until the second crop, the yield will then probably be greater than the total of two years’ crops on plants fruiting in their first season.

If you are very anxious to secure early fruit and if you are going to protect them with cloches or polythene tunnels, and then first-year blossom should be left on. Indeed, where earliness is considered all-important, the strawberries may be treated as an annual crop and a fresh batch of earlies planted every year, to be dug up and burned immediately after harvesting. In such instances, strawberries may take their place in the regular annual rotation of the vegetable garden.

Where size of crop is considered more important than earliness, and the plants are deblossomed in their first year, there is every prospect of the strawberries continuing to yield well for three years, possibly for four.

The perpetual-fruiting varieties, in fact, bear at least two distinct crops. In the first year after planting, the first batch of blossom should be removed to give the plants a chance to gain size and strength. Blossom appearing after the end of June is allowed to develop and the fruit will be ripe from late summer onwards. In subsequent years, you have the choice between two crops, one in June and one in autumn, and one, larger crop, earlier in autumn or in late summer.

Not long after the berries begin to develop, runners will appear. Unless these are required for propagation they should be cut off at once with scissors so as not to waste the plant’s energies. With early-rooted plants set out early, runners may even be produced in the first autumn and these should certainly be removed. Perpetual fruiting varieties tend not to produce runners so freely as the summer-fruiting kinds, but nevertheless these, too, should usually be removed unless required for increase.

Protection Before the first ripening strawberries are heavy enough to weigh the trusses down to the soil, some kind of protection is necessary to prevent the berries being splashed by mud. The traditional method is to lay straw on the soil, barley straw being more easily tucked close to the plants than the stiffer wheat straw and less liable to be a carrier of pests than oat straw. Before putting down the straw, weed by gentle hoeing, hand weeding, or spot application of weed killer.

You should not be in too much of a hurry to put down the straw because, as it is light in color, it loses heat rapidly and increases the risk of radiation frost damage to open blossom or tiny fruitlets.

Straw, however, is not always easy to obtain, and you can buy patented strawberry mats or specially made wire supports which hold the berries clear of the soil. Even a scattering of peat is better than nothing.

Slugs can do much damage in a strawberry bed and organic slug bait pellets should be scattered freely among the plants and kept renewed as necessary during the fruiting season.

Picking Out of doors the first berries are likely to ripen between four and six weeks from when the blossom opened. The fruit should be picked by taking the stem about 1cm (0.5in) behind the berry between finger and thumb. In this way the berry can be broken off without being touched.