Planting Colorful Chrysanthemums for Your Garden 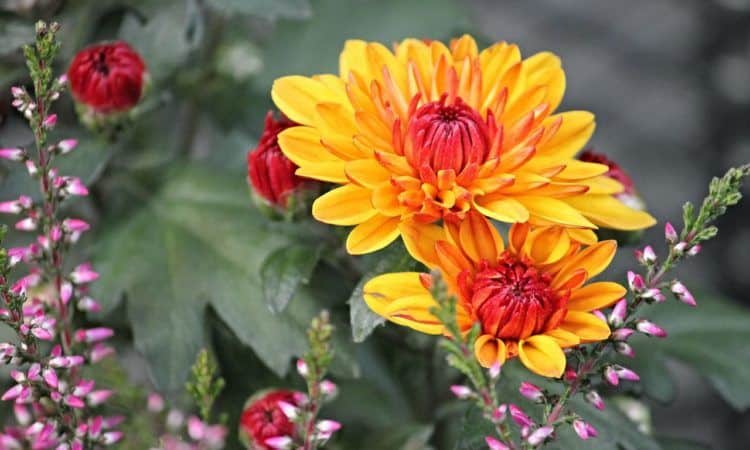 October and November are the months which marshal in the Chrysanthemums and if these months be cold and rainy, the flowers do not develop well, but if the days are warm and the nights frosty, but not freezing, these flowers are in the height of their glory.

“But when the earth is lonely, And the bitter north winds blow, With a smile of cheer for the dear old year, The lovely Christ flowers blow.”

The catalogs are now listing certain varieties such as Cranfordia, Normandie, Ruth Cumrning, Mme. August Nonin and Eden, which are known as early flowering varieties. One is more apt to get blooms before freezing weather when these sorts are grown. Some of the earlier Pompons of the florists are hardy but only bloom early enough in the most favorable years. Such varieties as Lillian Doty, Garza, Golden Climax, Zenobia and Tiber belong to this group. It is suggested that for the most northern gardens principally the earliest sorts be chosen, for it is a great disappointment to have the buds freeze just as they start to open. However, the Pompon group will actually stand more real freezing than the early flowering varieties.

GENERAL. Chrysanthemums will grow in any garden soil that is rich enough, for they are gross feeders. Buy plants in early Spring or divide old plants and reset each Spring, otherwise, they will become too crowded and impoverish the soil. Extra large blooms may be produced by feeding with liquid manure when the buds appear. Larger flowers may be secured by pinching off most of the smaller buds on each stem. When the plants make too rank a growth early in the season they may be cut back to cause them to branch and become more compact. If the plants are thoroughly soaked with water once or twice a week during the hot Summer, they will please us by producing better buds and flowers.

Protect the plants during the Fall rains and from the frost with a canvas covering. Chrysanthemums have to be supported by tying to stakes or to wires stretched horizontally above the bed. Cover with a light mulch during the Winter. The mulch should be more of the nature of a sun shade rather than a warm covering. It is easy to suffocate the plants.

The plants are frequently troubled with mildew which can be prevented from spreading by dusting with sulphur early in the morning when the dew is on the plants. Plants affected with lice should be sprayed every few days with Black leaf 40 or some other tobacco extract until the bugs are all killed.

PROPAGATION. The simplest method of increasing the number of plants is to divide them in Spring. One can make cuttings, however, of the tops of the growing plants