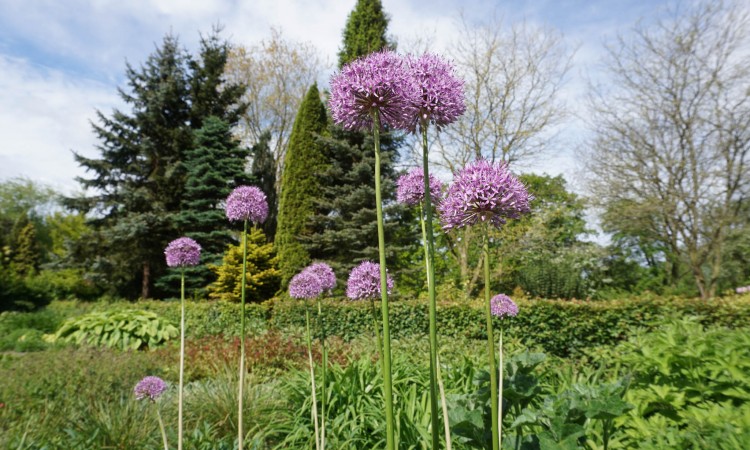 In many places in the United States columbines (Aquilegia ssp.) still grow wild. Highbrow hybrids dominate the marketplace, but even they seem to retain some of that wildness. While cleaning out an overgrown greenhouse once, I noticed columbines of indeterminate variety growing up through the cracks between the slate floor’s slabs. In my own garden they tend to self-seed, coming up everywhere but where I intend them to be. They are much like cats, domesticated to a point, but still inclined to go their own way.

Shakespeare celebrated columbines in his works, as did Chaucer. They have been cultivated in Europe for centuries, and in America ever since John Winthrop, an early Puritan leader and governor of the Massachusetts Bay colony, introduced a European variety, probably Aquilegia vulgaris, here in the 1630’s. A 1792 engraving of this species from a book on medicinal plants is in the archives of the English Royal Botanic Gardens at Kew. In an early case of cross-cultural exchange, the great English plantsman, John Tradescant, the younger, visited the young Virginia colony and sent seeds of native North American Aquilegia canadensis back to England in 1640. No matter where you live, if you have a cottage-style garden, you probably have some columbines in among the roses and hollyhocks.

The red and yellow Aquilegia canadensis that intrigued Tradescant is one of the most common native columbines. Despite its Canadian species name, it blithely ignores manmade boundaries and flourishes in much of the United States. With its nodding, complex flowers, it is characteristic of many plants in the genus. Individual blossoms are composed of several small, elongated trumpets or bells that flare at the tips. Aquilegia canadensis flowers also have the “spurs” that are common to many columbines. These spurs are actually modified petals that hold the nectar that makes the plants so attractive to hummingbirds and other pollinators. They also give the flowers an almost exotic look. A good friend of mine, who gardens a little but observes a lot, refers to columbines as “outer space flowers” for this reason.

The horticultural marketplace is full of columbines of all sorts. Almost all have attractive green leaves, with each leaf composed of three lobes. There are singles and doubles, tall and short varieties, cultivars with variegated foliage, and flowers that can be spurred or unspurred. In fact, you can find a columbine to match even the most exotic garden color scheme.

I recently ordered Aquilegia x hybrida ‘Tower Blue’, which is similar to older cultivars that sometimes go by the common name “Granny’s Bonnet”. ‘Tower Blue’ is a double variety, and it reminds me less of an old-fashioned bonnet than of the rather complicated hats worn by both Queen Elizabeth and the Queen Mother over the years. I am very hopeful that the effect of these small blue chapeaux will be charming rather than fussy in my garden.

Many hybrid columbines have been bred from the European Aquilegia vulgaris, including a favorite of mine, ‘Magpie’. This magpie is an especially attractive bird, with petals that are extremely dark purple (almost black) with bright white edges. I also like the double white varieties, that have no spurs and look like they have been partially exploded. One such cultivar is Aquilegia vulgaris ‘White Barlow’, another is Aquilegia x hybrida ‘Sunlight White’. ‘Nora Barlow’ Mix features double blossoms in an array of blues, pinks, and purples as well as white.

One of the most floriferous assortments of hybrid columbines is the “Music Series”. These plants form 18-20-inch mounds, produce an abundance of bi-colored blooms, and have the characteristic spurs. For a taller mix, try Aquilegia x hybrida ‘McKana Giants’. These rise to a statuesque 3-feet, and feature large, spurred single flowers in a range of colors. If you have a rock garden, or want columbines for the front of a border, Aquilegia flabellata, a short Japanese native with blue-green leaves works well. The ‘Nana’ hybrid has bi-colored flowers that are bluish-purple and white.

Anyone who has columbine in the garden probably also has leaf miners. These pests work their way through columbine foliage, leaving a characteristic meandering white trail behind them. Unless you are extremely finicky, there is nothing much to be done about leaf miners. Actually, the trails are not that unattractive, and the overall vigor of the plant is unaffected. You can, of course, pick off the blighted leaves if they bother you.

Columbine is particularly good for people who like a little randomness in the garden. They self-seed freely if left to their own devices. Since most of the varieties in cultivation are hybrids, you can never be exactly sure what will come up when the seeds germinate. Plant professionals have this same problem, since propagation of columbines is done almost exclusively from seed. If a particular color or form meets all your needs in a particular area of the garden, grow only that type. At least when nature takes its course, and the pollinators make their rounds, you have a chance of avoiding random variations.