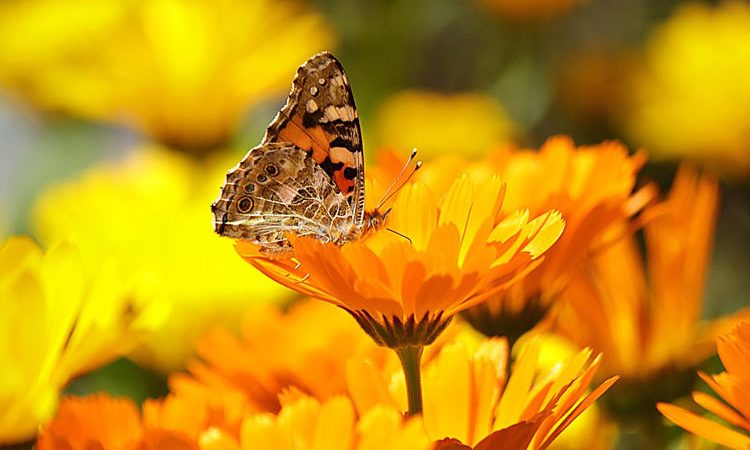 A Southern European Plant That Is Popular in Garden and Greenhouse

(Calen’dula). Showy annual plants from southern Europe belonging to the Daisy family, Compositive. They have simple alternate leaves and branching stems 1 1/2-2 1/2 ft. high, bearing large heads of yellow, yellowish or orange-colored flowers which are in full beauty during the summer. Calendula is derived from calendae, the calends, the first day of the ancient Roman month-an allusion to the almost continuous flowering character of this plant. Calendulas do best in full sunshine and in rather dry soil. They are raised, from seeds sown out of doors in the spring or early autumn where the plants are to bloom the following year and are very easy to cultivate.

When to Sow Seeds. The seeds are sown in ordinary soil in a sunny position outdoors in spring to provide flowers during the summer and, in mild climates, in September to furnish plants that will bloom in winter and spring. They may be scattered broadcast or sown in rows 12-16 in. apart. The seeds are covered to a depth of 1/4 in., and the seedlings are thinned, as soon as they are an inch or so high, to about 12 in. apart. The seedlings may be transplanted if desired. Frequent hoeing between the plants is necessary to keep down weeds. If the flower heads are removed as soon as they begin to fade, the flowering season is prolonged. The plants from the spring sowing begin to flower in July and continue to bloom all through the summer and far into the autumn except where very hot, humid summers prevail. Such conditions cause Calendulas to produce fewer and smaller flowers or to cease blooming entirely and perhaps even to die. Plants raised from seeds sown in a comparatively cool location in July or August and later transplanted to their flowering quarters will bloom in fall until killing frost. They are good for window boxes, are frequently used in summer plantings and make good pot plants for spring flowering in the greenhouse.

The chief kind is the Common Pot Marigold, Calendula officinalis, a native of southern Europe, 1 1/2-2 1/2 ft. high with light green leaves and hort stems branching from the base and bearing single or double, yellow flowers, 2-3 in. across, during the greater part of the year.

The blooms of the Art Shades strain range through buff, apricot and cream, and sometimes two or more colors are blended in one flower.

The Chrysanthemum-flowered Calendula has semidouble flowers of an attractive pale yellow shade. Other kinds are the Field Calendula, C. arvensis, a European plant, 2 ft. high, with single yellow flowers, and the Madeira Marigold, C. maderensis, with orange-colored flowers on erect stems 2 ft. high.

Greenhouse Culture. An easy way to enjoy a few flowers of Calendulas during early winter is to lift, before severe frost, some of the smaller plants from a midsummer-sowing that is flowering in the outdoor garden and plant them singly in rich soil in 6or 7-in. pots. A succession of flowers will be borne if they are kept growing in an airy environment where there is good light and where the temperature drops at night below 55, not seriously below 40, degrees.

To get the best results, however, seeds should be sown especially at any time from mid-July to mid-August. Flowers may be expected from this sowing from October through to February. Sow in a pot or flat indoors or in a protected area outdoors, such as a cold frame, where shade can be given until the seeds germinate. Any good garden loam which is well drained is satisfactory for germination provided continuous moisture is available. The seedlings should be transferred individually to 3-in. pots as soon as they are large enough to handle. The soil used for this potting should be loam (good topsoil) of a friable nature. Grow the plants in these pots, in semi-shade, until roots almost envelop the soil ball. Then, before they are tightly pot-bound, and suffer from lack of root room, they should be planted in their flowering quarters in well-drained garden loam enriched with thoroughly decayed organic matter and a light dusting of 5-10-5 or other fertilizer (see Fertilizers) high in phosphorous.

This final planting may be into pots that measure 6-8 in. in diameter but they are most satisfactory when they are planted in benches of soil in an airy greenhouse where the temperature is allowed to drop to 45-50 degrees at night during winter months. Space the plants 12-15 in. apart in the benches; the soil should be 5-6 in. deep.

A second sowing of Calendulas, made late in October, will provide flowers in the greenhouse February—April.

Ample ventilation of the greenhouse is all-important, particularly if the growths of the Calendulas are crowded. When there is not a free circulation of air a leaf spot disease is likely to ruin the crop.

Thin the growths to 7 or 8 branches to each plant and remove excess side growths in order to get large flowers with long stems. The chrysantha varieties, which have deeply fringed petals and very double flowers, have been popular for many years. Campfire, Art Shades and Lemon Beauty are among the best. Careful watch must be kept for early signs of attack by pests and disease and prompt remedial measures taken.

Economic Uses. Besides being of great value as a cut flower, the flower heads are used, when dried, in cookery to flavor soups and stews, as well as for coloring butter. The florets were once used for healing wounds and as a preventive of sickness. The flowers and shoots of Calendula officinalis, the common Calendula of gardens, have stimulant and diaphoretic properties. They were at one time popular as a country remedy for the treatment of ulcers, etc. An infusion was used for external application and the drug was also taken internally.