Adding Color to your garden 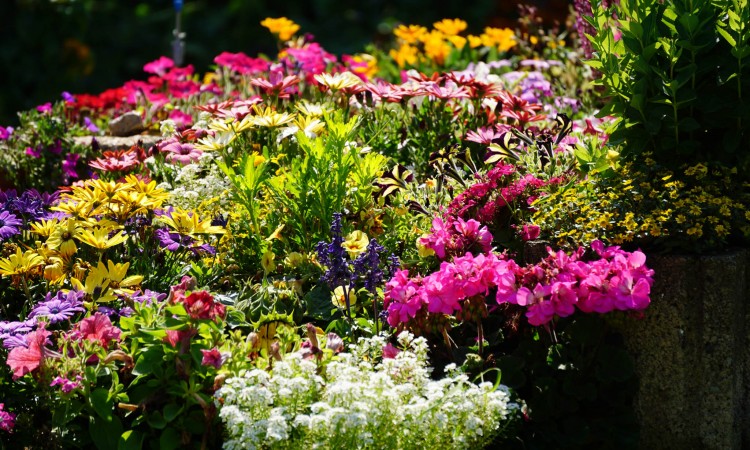 The colors chosen in the planning of a garden are very much a matter of personal taste but there are particularly pleasing combinations.

Nature seldom, if ever, makes mistakes with color. Every hue seems to have full value and expression, not only to its own advantage, but also to that of the others surrounding it. Color clashes seldom occur in nature.

Foliage has as important a part to play as flowers in garden decoration; color variation in foliage is wide and of the utmost significance, vital to be borne in mind, especially where all-theyear-round decoration is the aim. Deciduous and evergreen leaves, therefore, should be allowed to play their full part, and not only through choice of plantings, but also by intelligent positioning in order, say, Santolinathe sun in certain seasons, or to match and contrast with other plantings nearby.

This applies also to the wide and vivid range of ornamental berries and barks, so useful especially during the later and winter months, when blossom is scarce. Let the many winter-flowering plants, trees and shrubs be given their proper role. If planted in the right proportion show, pink goes well with a variety of silver tones; admirably demonstrated by its own foliage. There are many other forms of silver foliage among plants, trees and shrubs and these could be made a good deal more use of to very great advantage.

Almost any other color goes well with it, for example Senecio laxifolius, a charming small shrub whose golden-yellow, summer-borne daisies contrast perfectly with its silvery-green leaves. The same effect can be seen in another small shrub, Sontolina incana, and in Potentilla fruticosa whose blossoms extend through quite a wide range of yellow and gold and also include some whites. The silvery leaves of Pyrus salicifolia pendula contrast richly with the plum-purple foliage of Cotinus coggygria foliis purpureis, where this tree and shrub (both of fair size when full-grown) have been wisely sited near Bedding plants, particularly those used in summer schemes, provide scope for brilliant color weaving. Senecio maritima ‘Diamond’, bright with silver leaves, is outstanding for providing contrast with, say, pink antirrhinums, or the purplish-mauve Verbena venosa. A mixture of all three is remarkably striking.

Yellow is one of the loveliest colors of all. And it has the ability to give the utmost life to any border without ever tending to harshness. It can become monotonous if usede xcessively—especially in its darker tones—though, pale, can be superb as anthemis and annual chrysanthemum in some of its varieties can show. Superb with blue, as Platystemon californicus with Echium ‘Blue Bedder’ will demonstrate in any annual border, it is equally so when in company with mauve, as a further example: Clematis x jackmanii grown near climbing rose ‘Mermaid’ will prove.

Any comprehensively stocked border of hemerocallis, or day lily, will make it clear how well yellow tones with orange; together, a rich mixture to be remembered. Orange, though brilliant in itself, can become tedious if used too liberally, though vibrant in the extreme where used in correct contrast, blue and orange and white and orange are superb. Arrange them by growing love-in-a-mist and calendula, and sweet alyssum with Ursinia anethoides, for instance; all among the loveliest of annuals.

Green is everywhere, nearly always precisely where it is wanted from a color point of view and just the right shade. It is so acceptable that it may be taken for granted, though less so during the spring where deciduous trees and shrubs are concerned, for it is then that they are at their brightest.

But green really comes into its own where conifers are concerned, combining with foliage textures and character to yield remarkable beauty. Appearing in an infinite number of shades, it extends in one direction into various golds and bronzes, and in another into shades of blue and silver-blue that are classic. Cedrus atlantica glauca and Picea pungens kosteriana, for example.

Where space permits, conifers are almost essential for helping to ensure color-interest throughout the twelve months of the year. Clearly, they come into their own during autumn and winter months, though can make wonderful backgrounds for spring and summer blossoms and foliage if planted thoughtfully.
Evergreens in general, carefully them offer foliage in several different hues in addition to their flowers.

Several factors come to bear when selecting planting material for stocking a garden with the intention of providing as much color as possible. One of these is that of size and it is one of the most important. It should be remembered that sharp color contrasts are rendered more so in confined areas. Sometimes this is acceptable, but may also produce too bright an effect at close quarters; wiser, perhaps, to reduce the number of violent colors in small gardens unless adequate white is used to soften them.

Larger gardens obviously afford greater scope and even the brightest array of flowers will appear to have less individual impact, even though they retain their proper significance. It is, of course, under these circumstances that large herbaceous borders come into their own where there is ample space to accommodate them. Vivid as the constituent colors may be, the overall picture is one of tasteful blending.
And it is in larger gardens that additional scope arises for self-colored borders. Not, perhaps, to everyone’s taste, they can nevertheless be most attractive, though certain colors are more suitable than others. A completely blue border would, perhaps, be the easiest to look at. Blue is a restful hue and there are a great many shades, sufficient to avoid any suggestion of selected from the wonderfully wide range, can yield gold, silver, dark green, light green and a host of brilliantly variegated leaves, some almost vying with blossom. Sometimes dismissed as dull and uninteresting, evergreens are anything but, and of course many of them bear some of the loveliest blossom in cultivation .

Deciduous foliage effects should come high on the list of garden adornments, making as they do a major contribution to the continuity of color. The Japanese acers could scarcely be more brilliant in this respect, nor could liquidambar, lindera and that charming little shrub or small tree—Amelanchier canadensis, foaming with white blossom in May, bright with purple berries in June, and aflame with autumn fire as its leaves make a final flourish before falling as the year draws to its close.

Though deciduous, beech will retain its dead leaves, crisp and richly brown, throughout winter, when clipped as a hedge. Their effect can be greatly enhanced where dark evergreens have been planted close by. Chamaecyparis lawsoniana is first rate, here, and if planted in company with a clipped beech will make as handsome a combination of green and brown as anyone could wish to see.

So it can be seen that by a degree of prior thought, hardly a day need see an absence of effective color of some kind in the garden. And color planning can be great fun as well as vastly rewarding, with foliage and flower, berry and bark making their own special contribution.

And barks are, perhaps, the most neglected of all the sources of garden decoration. There is little justification for this, and it seems a pity to forego for example the magnificent red of Cornus alba sibirica, the green of Leycesteria formosa and the orange-gold of Salix vitellina britzensis during the dormant season in particular.

The color year has no beginning and no ending where the shrewd gardener has been at work. He has his traditional spring flowers in masses, allied to spring-flowering shrubs such as chaenomeles, forsythia and ribes (and how magnificent Ribes sanguineum looks in company with daffodils and narcissi), not to mention the hosts of ornamental cherries, plums and apples.

Summer is filled with blossom and foliage of every conceivable kind. Autumn has sufficient attraction where late blossoms have been grown and where fruiting trees and shrubs have thoughtfully been provided (the ornamental crab apples really come into
monotony. Twelve herbaceous plants to form a sound basis would be: Anchusa azurea, Lupinus Russell Strain `Gladys Cooper’ ; Salvia uliginosa; campanula in variety; Polemonium caeruleum; delphiniums in many blue varieties; Geranium grandiflorum; blue flag iris; Echinops ritro ; Penstemon heterophyllus; Linum perenne and Platycodon grandiflorum. Such a border could be effectively backed by flowering shrubs to include ceanothus in some of its forms; Hibiscus syriacus coeleste and Hydrangea macrophylla ‘Blue Wave’, kept adequately blued.

A solely yellow border might well prove too much of a good thing, though perhaps not if kept to reasonable proportions. The same goes for orange, even though there could be a remarkably striking effect with, perhaps, certain kniphofias, alstroemerias, hemerocallis, lilies of various kinds, Ligularia clivorum and Geum ‘Prince of Orange’, as a basic half dozen. Better, however, or so it would seem, to blend orange with yellow, with maybe the occasional dash of white; in all producing considerable richness. This would certainly allow the full range of hemerocallis varieties to be brought into play, worthwhile under any circumstances.