Do you have the Correct Bedding Plants in your Garden? 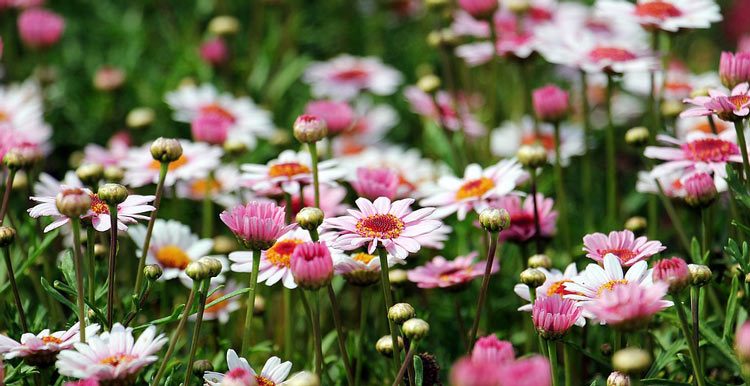 The description bedding plant is not an exact one and only means that the plant is grown elsewhere in some quantity and then planted out as a temporary occupant of the bed; this being known as `bedding out’.

The bedding plant in private gardens has, in general, had its day, since this style of gardening entails much expense. In public gardens and for certain formal occasions the bedding plant still has its uses.

This term, in use by gardeners, describes a form of gardening in which plants raised elsewhere in a nursery garden or greenhouse are planted out in a previously prepared bed. This style of gardening is seen at its best in some of the many excellent public parks, but because it is comparatively expensive and entails the use of a reserve garden it is not particularly well suited to the needs of the modest suburban gardener. The Victorian garden of the more opulent parvenu was generally devoted to the most elaborate form of bedding out called carpet-bedding, in which numbers of potted plants were sunk in the beds to their pot rims. In really ambitious plantings of this sort even exotics such as palms, bananas, tree ferns, castor oil plants, giant cannas and agaves were sometimes used, though this necessitated a considerable amount of heated glass in the nursery garden and today this style is more likely to be seen in a public garden of one of the larger seaside resorts than in a private garden. Many gardeners will treasure the memory of the period when Thomas Hay was superintendent of the Royal Parks. Then one saw some very rare plants used in bedding schemes of an entirely new and very refreshing kind, a complete change from the hackneyed combination of ‘Paul Crampel’ pelargoniums, blue lobelias, and sweet alyssum.

Spring bedding Beds planted for spring display rely very heavily upon bulbous plants including: tulips, hyacinths, narcissi, Spanish and Dutch irises, crocuses, scillas, and grape hyacinths and some others less important. Because they are very reliable, tulips and hyacinths are particular favorites for this treatment, for if the bulbs have been purchased from a trustworthy source each will invariably produce its flower or flowers in due season. A scheme in which tulips are underplanted with arabis, aubrieta, alyssum, or forget-me-nots is so well known as to be a gardening cliche. Great flower bed ideas could be found on Decor Home Ideas website.

Various large-flowered polyanthus primroses are much in favor, as are also the so-called winter-flowering pansies, and the fragrant wallflower. It is very important in this style of gardening to keep the taller plants to the center of the bed. A popular flower for the outermost edge planting is the old-fashioned double form of the daisy

Since there is no winter bedding the bedding plants and bulbs can, of course, be put in the beds in September or October, and such plants as the winter-flowering pansies will give some flowers right through the winter, though this will not exactly be an arresting sight. On the French and Italian Riviera, winter bedding schemes are important, but our climate makes it unsuitable here.

Most of the spring bedding plants will be past their best by June, and those which it is considered are worthy to be kept may be heeled-in in a reserve bed of the nursery garden. It is well to remember, however, that tulips and hyacinths must not be relied upon to give flowers for two successive seasons.

Summer bedding Bedding plants for summer planting must be raised in early spring under glass. The skill of the operation is proved when a good uniform crop of plants is ready and hardened-off in time to replace the spring bulbs and other plants now well past their decorative best. Most of the bedding plants may be conveniently grown from seed, though sometimes cuttings are needed, and cannas, dahlias, tuberous begonias and Salvia patens are generally grown from tubers. The latter plants may all be grown from seed but this is a longer operation and generally, the plants are not capable of giving the uniform result which is one of the aims in bedding schemes.

The seeds may be grown in boxes (fairly deep) or one or more plants may occupy a pot. The latter method is certainly to be preferred for the more precious and difficult plants, since the root ball, if intact, gives the plant protection against the rather drastic operation which transplanting certainly is. For some weeks after this operation, the plants must be given a daily watering, for in high summer there will be a considerable loss of moisture.

In planting out it is necessary to bear in mind the ultimate spread of the plants, though should they be planted too closely there will be an opportunity of thinning-out later. A supply of reserve plants should be kept as it is inevitable that a few casualties will occur.

A point of importance in preparing the bed previously to planting is to mound it up quite considerably. With a flatbed, the full effect of the planting scheme will not be appreciated, except, of course, in those rare instances when the beds are planned for those who will view them from above, as, for instance, from a terrace.

Bedding schemes The preparation of bedding schemes involves some elementary knowledge of color and a feeling for the combination of those hues which enhance each other.

There is not space here to deal with the whole theory of color, but a few suggestions may be given to aid in making harmonious mixtures.

Since all plants will have leaves the one color which may not be avoided (except with a very few foliage plants) is green. To produce harmonies which take this foliage green into consideration it is necessary to use the portion of the spectrum which includes the yellows, both cold (lemon) and warm, the range of apricots and orange colors, and the reds of hot vermilion hue. Maroons and tawny brownish colors such as one sees in wallflowers are also most pleasing with the green of spring leaves. Salmon and coral pinks are also included in this harmony. The range of colors above mentioned is particularly well represented in the flowers used for spring bedding, and such combinations represent the essential spirit of spring-time.

Because of the great range of color obtainable in tulips it would be possible to vary the spring bedding schemes almost indefinitely. In addition to the colors mentioned the tulips embrace: cold silvery pinks, mauves and violets, scarlets and crimsons, white and cream, and even one or two with a color so intense as to approach black. A good blue is, however, lacking. When using tulips (or any other flower) of these colors the foliage is used merely as a background and not as part of the total color scheme.

It is important to avoid certain discordant effects, such as combining scarlet and crimson or orange and the well-named ‘shocking’ pink. Blues and mauves are unhappy together, and so are magentas and purples. It is true that these discords are resolved when the beds are seen at a distance, but, in fact, the schemes will be judged at a quite close range.

A brilliant effect may be obtained by using complementary colors. A mass of blue is set-off by some orange; yellow finds its complement in purple; and the reds are taken care of by the predominant green of the foliage.

If the beds are planned to be seen from a more or less fixed view-point the problem is simplified somewhat, and it will be possible to take into consideration the enhancing of the perspective. White, yellow and other pale colors will be used in the foreground, and the distant beds are taken further back (in appearance) by the use of predominating mauves, blues, and colors which, as the Victorian gardeners said, retire.

Having considered general principles it is not necessary to give lists of plant combinations, and it is refreshing to come upon new and original plants used in bedding schemes. The list contains many plants from which a choice may be made, but should it be desired to use other plants for this purpose it is most important to use those which will give a long period of blossom, and which do not present a disconcerting green jungle halfway through the summer season (see Beds, marking out).